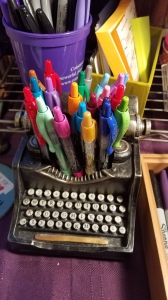 I’ve been rereading The Cambridge Companion to Popular Fiction, edited by David Glover and Scott McCracken. I can’t explain why except that the current upheaval in publishing is making me ask questions about the history of the business. In Chapter Six “”Reading time: popular fiction and the everyday,” editor McCracken makes some important points about what happens to readers when they read. Knowing more about reading and how a reader’s experience might affect my writing is definitely a question worth asking. McCracken provided me with a variety of diving boards from which to jump into my own head or other texts. I am drawn to this sentiment from Chapter Six:

The thriller thus allows for different forms of attention, which rely on a comprehensive knowledge of what to expect from the genre, a knowledge culled not just from written fiction, but also from film and television. Yet despite the familiarity of the structure, like the popular song, the successful thriller has to have a ‘hook’, an intriguing element of originality, which draws the reader in (Cambridge 112).

McCracken’s “forms of attention” triggered my curiosity about how I could understand his meaning and apply it to writing romance. While McCracken focuses on thriller novels for this thought, he is really talking about the tension and pacing of a novel. Romance has a sub-genre of romantic suspense, but all romance fiction has some degree of tension derived from the question “will they or won’t they?” The suspense of not knowing the answer and vicariously living the struggles the heroine and hero endure on the way to resolving the question is the same as “will the detective figure this out?”

McCracken emphasizes his premise with three primary examples that thriller novels can/do focus on different forms of attention, and I wondered what that meant in terms of how the brain deals with time (which underlies McCracken’s chapter) during different kinds of stress/excitement/worry/etc. Why does one form of attention in a thriller appeal to readers more than others?

I found a kernel of an answer in  The Secret Pulse of Time: Making Sense of Life’s Scarcest Commodity written by Stefan Klein who says:

The way we judge the length of an interval of time depends not only on the gauge the brain uses to estimate the elapsed time but also on the degree of our focus. If consciousness is occupied with other matters at the same time, we underestimate the time that has passed; if we are hyperalert—for example while watching an act of violence in a film—the seconds expand (62-63).

My interpretation of this is if a reader (or viewer) is thoroughly absorbed by a scene, paying more focused attention, the time will feel longer to them. The less engaging the writing or the acting, time will seem to pass more quickly for the reader/viewer because the brain is susceptible to distraction. It’s the difference between quickly scanning the pages of a magazine (distracted focus) and examining every detail of one particular page for several minutes (deep attention.)

Klein claims that during intense action it is the “sense of dread that makes the scene seem agonizingly long—like waiting in the dentist’s chair in view of the drill” (63) that captures the reader’s brain and holds them spellbound.

Therefore, my writing needs to include more showing and less telling to increase the reader’s vicarious experience with the action, and this will have positive effects on the degree of tension and pacing in my story.